OUT OF THE COCOON

It’s been almost a month since hubby left again not knowing when he would have the chance to come home and see us. For security purposes, they’re not allowed to use their cellphones, which I personally find really retarded. The first week, I was a stone’s throw from losing my wits. Why, what wife wouldn’t lose her mind when she doesn’t have any idea as to her husband’s whereabouts. It’s like walking towards a cliff, backwards. Anyway, this blog isn’t about venting or anything like that. I want to keep my hopes, no matter how frail if not elusive they are most of the time.

Last night he called. They were given an hour break and get in touch with their loved ones through phone. I was blabbering, trying to sound casual as I didn’t want crying bouts to start. He was just listening most of the time, telling me how much he missed me, how wonderful my voice sounded, describing to me how magical the fireflies can look at night. He watches their nightly performance, the best that he can look forward to, at the end of the day. I told him Feb 14 is fast approaching. We will be reaching our 5th year of being married. God knows how much I pray for him to be there on that day. Nevertheless, I got my own plans. Me and my officemates have already booked a private videoke room. I won’t have time to be manic-depressive. I promise.

He was able to give me their exact location. Today we drove to that faraway town, to that primitive sounding barangay, and to where we saw their little makeshift tents erected proudly, but rather grotesquely, at least for me. Papang had a plan. We would pretend something’s wrong with the engine. That would give us at least 10 minutes. And so the engine ‘went dead’ right in front of the camp gate. How marvelous. Anyway, we didn’t see him. I suspected he was trying to hide up on that tower where he said he was assigned as a sniper. Whether he saw us or not, I didn’t think it mattered. It was enough for me that our son saw where his Tatay stays, while he’s away from us. As we drove away, I took two desperate shots. Just to try and capture the moment. In this first photo, Abe’s hand is shown waving. “Babay Tataaaayyy!!!” 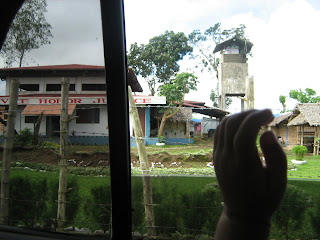 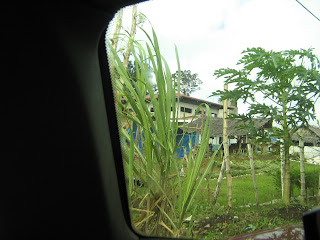 It tugs at my heart, of course. Leaves this kind of pang that has become so familiar over the years. But I don’t have any choice but to stay strong, have I? “Nurture strength of spirit for sudden misfortunes” as my present mantra from Desiderata would say.

I praise and thank the Lord for being my pillar, for being a friend who doesn’t get tired of me. After some period of darkness I am out again, wanting to be excited for the happy days.

subo gid man...manapla na? tuod man, im not joking, we can go there and i'll talk to the head miskan ka dali lg..

i feel for you...ann, subo man gid...undoubtedly would challenge any strongwilled and the optimist...i was at the brink of crying on seeing abe's hand.hayyy,amazing how a child is just so full of strength and wisdom.

Love your b log..have added you to my links..

Mir, thank you. It comforts me to know I don't need to tell you the details para ma intindihan mo ko...*hugs*

Mrs Parkes! I am so happy to see you here and so so honored to be included in your links. Many many thanks :) We're presently working on your article for Misyon and I've already been inspired just by doing the VCD presentation.

Hope you find strength. Ahay amo gid na layu-ay no? kasubo pero di mo mabatyagan he will be back soon!

Anne, daw mahibi man ko ya sng situation niyo ah. luoy man sa inyo. can only imagine how hard it is for you! i hope you get to find a way to change things soon! and take heart, God IS always with you, my friend!

mapz, IA, thank you for the encouraging words :) helps to know friends understand. right now, I am just trying my best to endure. prayer of St Francis helps me these days..."Lord, grant me the serenity to accept the things I cannot change, change the things I can. And wisdom to know the difference."

i didn't realize how challenging it was to be in your situation. i think i will cry my gusts out, get crazy even!

your strength is a grace from God.

mama_aly, thank you. yes, it is indeed a grace from God. i've long since given up if it wasn't for Him.

Translate to your own language